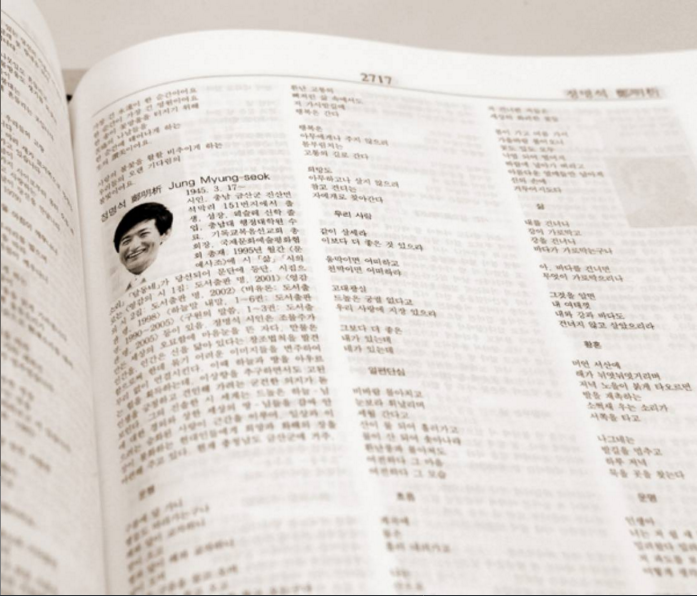 Introduced in ‘The Encyclopedia of Korean Poetry’, page 2717

‘Poet Jung Myung Seok is someone who has opened his eyes to the mysterious and profound wonders of the world created by the Creator. He discovered the law of creation, which states that nature is like human beings, and human beings are like God. In his poems, he ties together and connects a variety of difficult concepts [within this theme]. Then he gains the power to embrace both heaven and earth. He pursues an ideal world and at the same time, reveals [in his poem] his strong will to maintain his optimism and endure his difficult life.

Along with 3500 others, President Jung Myung Seok of Christian Gospel Mission is a believer of God who lives only for the sake of saving lives, and was recently recorded in a larger, revised edition of ‘The Encyclopedia of Korean Poetry,’ which represents 100 years of the history of poetry in Korea (1908 ~ 2010).

The book made the evaluation that Poet Jung views the essence of nature from the perspective of the Creator’s law of creation. He was also described as someone who binds the love of Heaven and Earth through his world of poetry.

Especially through the following appraisal [of Jung], it was acknowledged that he has penetrated both the world of God and the world of reality: ‘His sincere world of poetry expresses a love of praising Heaven and love of embracing the broken Earth. His literature creates hope and harmony for modern people whose lives lack a balance between reality and ideals.’

Poet Jung’s name was recorded on page 2717 of The Encyclopedia of Korean Poetry, published last March.

In this book, Jung was introduced as a poet and ten of his poems were introduced, such as ‘Narrow mind,’ ‘Life,’ ‘Our love,’ ‘Movement of the cloud,’ ‘Never-changing heart,’ ‘Hope,’ as well as others.

In his poem ‘Hope’, he sings of true happiness and hope that is gained only by someone who has overcome difficulties and has been trained in perseverance.  He also reveals the deep truth of life and initiates deep thoughts within the reader.

Poet Jung Myeong-seok’s book, ‘Spiritual Poem’, became a best seller in 1989. He officially became a poet through ‘the Munyesajo (Literary Movements and Trends) Writers Association’ in 1995, and had the spotlight shone on him in the world of Korean poetry and literature.

Since then, Poet Jung has never slackened in his writing of poetry as he releases between three to five poems every month. He has now released around 3,000 poems. He has written around 30,000 proverbs of wisdom that he received through his life of faith and, among them, 6,000 proverbs were published in six books (Heaven’s Words, My Words).

The large, revised version of ‘The Encyclopedia of Korean Poetry’ shows 100 years of the history of Korean poetry at a glance. It includes all the poets [of the 100 years], from the early poets in the history of Korean poets (Choi Nam-seon, Lee Yuk-sa, Lee Sang-wha, Jung Ji-yong), to the most recent poets (Jung Hyun-jong, Cheon Yang-hee, Hwang Dong-gyu). [The book includes poetry from] poets who have deceased, poets who were lost due to being kidnapped to North Korea or defecting to North Korea, and poets who are still alive.

Poet Jung Myung Seok has never given up his life of composition, even in his current most inadequate environment, but has sublimated his misfortunes into happiness by challenging himself endlessly with hope. That is why the board committee of The Most Beautiful People of 2013 from Seoul Education Broadcasting highly appraised his passionate creative writing activities and nominated poet 1178 Jung Myung Seok as The Most Beautiful Person of 2013. His heart for life beats and surges like a wave throughout his compositions and within the merit of his missionary works.

The Selection Committee of The Most Beautiful Person of 2013

How he was nominated: This year poet Jung Myung Seok published two volumes of the series, Poems of Inspiration– The Woman of Poetry and Speaking Through Poetry. Since he has a wide circle of readers, both of his books made records as weekly bestseller at Kyobo Book Centre. Despite being imprisoned currently in Daejeon prison, we found that his fervor for literary creative writing has transcended his confinement; he has been writing almost as many pages as one book every week.

There are many people who have different views towards Jung. However, from a literary point of view, the diction Jung uses in his poems is unique, and at this time when poetry is already being considered a dead literary genre, Jung has engrossed himself in only writing poetry instead of essays or novels and has written thousands of poems thus far. Among those poems, he selected some of his works and published them into two books. In the future, we hope that more budding poets will be born from many other places so that poetry will resurrect again from its current state of depression in Korean literature. With that anticipation, we have nominated poet Jung Myung Seok as The Most Beautiful Person in 2013.

Who is poet Jung Myung Seok?

Who is poet Jung Myung Seok? He was born in 1945, the year of the rooster. At that time, Korea was under Japanese colonial rule. Around the time when Franklin D. Roosevelt, Winston Churchill, and Joseph Stalin were making an agreement on the 38th parallel at Yalta on the coast of the Black Sea in the Soviet Union on February 4, 1945, a boy was born in Wolmyeongdong (Dalbar-gol), Seokmak-ri, Jinsan-myeon, Chungcheongnam-do, South Korea. At that time, the district was not called Chungcheong Province but Jeolla Province. Poet Jung Myung Seok was the third son of Jung Pal Seong.

What kind of hope was there during the colonial period? Even at birth, Jung faced death. Because of his lack of immunity as a baby, he stopped breathing due to a certain disease. His mother-in-law kept nagging his mother to bury him quickly because it was an ominous sign, but his mother felt sorry for him. When she looked at her baby’s face, thinking that would be the final time she would ever see him, at that moment, he suddenly opened his eyes.

“Since he is still alive, let me have him for one more night…”

During that time, he had become unresponsive. His mother thought he had died after suffering from his high fever, so she laid him down at the corner of the room and covered him with a cloth. His mother was waiting for night to come so that she could try burying him discreetly at the back mountain. She wanted to see her son for the last time, the one whom she had given birth to with labor pains after 10 months, so she peered through the blanket. At that moment, he suddenly opened his eyes again. He wasn’t even crying. Jung spent three days like that. This miracle happened as his swelling subsided. That’s why his mom named him Myung* Seok because he seemed to have many lives. This is the childhood story of poet Jung Myung Seok.

(Translator’s note: Myung(命) is a Chinese character and means a life. However, later he changed his name to Myung(明), which means bright.)

Could the reason all his poetry is directly connected to life perhaps be because of what had happened in his childhood? Since he had experienced death at such a young age, during his adolescence, he often pondered deeply in solitude about life. Later on, while serving in the Vietnam War, he realized the value of life, the futility of life, and the fundamental world of God through first-hand experiences. He was able to live because of his mother’s love, which had compelled her to peer through the blanket to see her son’s face one last time, and so his affinity towards lives also stems from love.

The reason Jung’s poems are so good lies within their earnestness. His unquenchable earnestness towards what he is yearning for is carved deep into his poems like markings. When you see a flower, you can know about it by its fragrance. In the same way, all his poems give off a certain fragrance. Vol. 3 of his Poems of Inspiration titled, The Woman of Poetry, contained truly beautiful pieces. In order to understand the poet Jung Myung Seok, just as a work of art tells something about its author, reading his poetry yourself is the fastest and the most genuine way to get to know him.

The Encyclopedia of Korean Poetry was published by EJP Books, and Jung is in the 2011 edition. This book includes poems written by 3,500 poets who represent the history of Korean poetry from 1908 to 2010. The encyclopedia showcases ten of Jung’s poems; some of which include The Terrain of the Heart, Life, Good and Evil, Our Love, Operation, A Never-changing Heart, and Hope.

When you read his poem called Happiness is on Its Way, you can see how he depicts a deep aspect of life with simple yet meaningful diction.

Happiness is on Its Way (Full-version)

In life’s winter, where blizzards blow, there Happiness goes,

Even in a bone-aching life of anguish and suffering,

Not permitting itself to just anyone,

It heads toward the path of pain, of man’s struggle.

Hope, also, not wishing to live with just anyone;

Seeking the one who endures, it goes.

Happiness and hope are surely abstract nouns. We cannot touch them and they don’t have specific forms. However, poet Jung describes happiness and hope as entities that exist and that are living. Happiness and hope are not abstract to Jung. He personifies them as entities that have a specific form. We wonder, how earnestly did he want happiness and hope to the point that he would portray their looks with such diction? When we look at his style of speech, the way he connects the verb, seeking, to the abstract nouns, we catch a glimpse of his bold transcendence of the existing grammatical rules in poetry. Of course, modern poetry is also highly influenced by free verse, so it is not bound by grammatic structure either.

Once again, we’d like to ask, who is poet Jung Myung Seok? Hearing from Jung directly about who he is would be the most genuine approach. However, written words are an expression of one’s heart. An art piece reflects the thoughts of its author, and an author speaks through his work. Likewise, Jung speaks directly through his work, one being The Woman of Poetry. What more words are needed? Who knows? During the times of our deepest despair, perhaps you will also be able to draw hope like finding an oasis in a desert through the words of his poetry.

In this book, 77 poems and paintings are divided into three themes: <longing>, <life and wind> and <with all of one’s heart>. These poems are written in a simple and pure language, yet contains wisdom that penetrates this world to the next. The book reveals the providence of God through parables, and tells stories about life in a concealed manner.

The poet has been studying the Bible for over fifty years and experienced numerous adversities and passions. The poems are the secrets of life he realized. Above all, the image of the poet pursuing “eternal love” with his mind rings across this world that pursues finite material things and momentary pleasure. Those who read this book will discover the true hope that the poet shares, and together, joyfully gain the light for one’s soul.

The contents of this page are permitted for reuse under the CC-BY-SA. 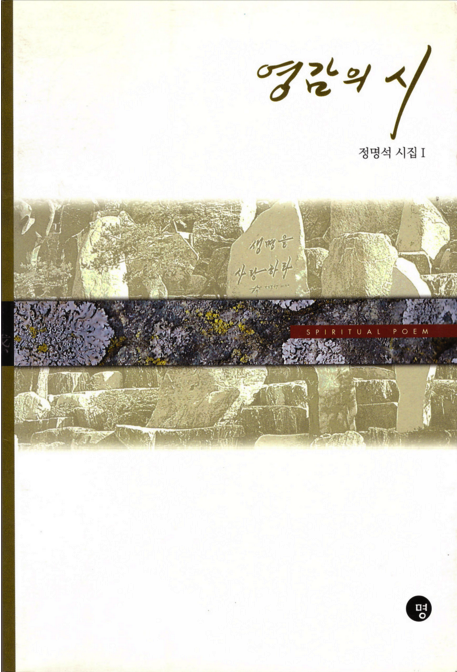 We feature the first poem in this book, titled “Never-changing Heart.” The poet writes this poem with the heart that never changes as a bride towards the heavens, even if the situation may seem detestable or unfavorable.

(*Translator’s note: For traditional Korean weddings, the bride adorns herself with rouge on her cheeks and lips.)

A Palanquin, where a bride sits and is carried to her groom.

The contents of this page are permitted for reuse under the CC-BY-SA.