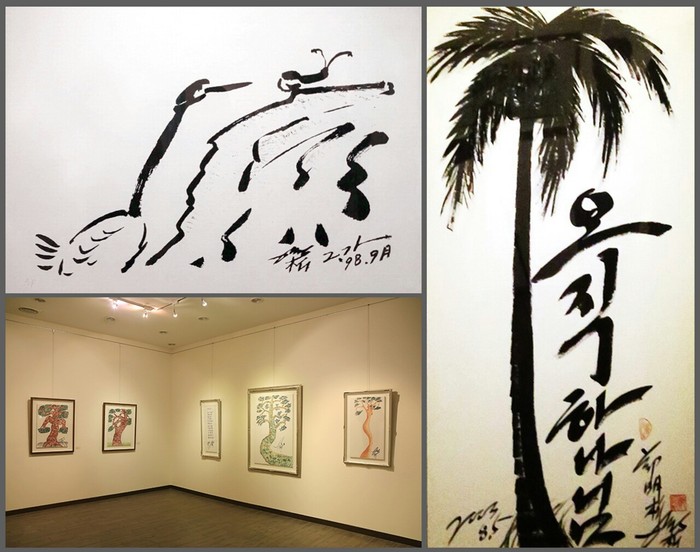 What would a world of art be like? A world where life becomes art and art becomes life, and a world that is created through our communion with the One Divine Being? As a religious leader (Jung Myung Seok), this artist accepted art and developed a style of art that is unrestricted by formality or genre and is free and unique.

What would a world of art be like? A world where life becomes art and art becomes life, and a world that is created through our communion with the One Divine Being? As a religious leader, this artist accepted art and developed a style of art that is unrestricted by formality or genre and is free and unique. Our exhibit displaying his world of art has opened.

The artist of these paintings is Jung Myung Seok, the president of Christian Gospel Mission. The exhibit of his art paintings has been premiering at the Gusang Art Museum in Wolmyeongdong, Geumsan-gun, Chungnam, since February 21. Displayed at the exhibit are the paintings of rocky cliffs and palm trees that he has drawn the most, as well as many other paintings besides the pine trees.

The artist’s view of art: Only when we know the Holy Son Jesus who is the way, the truth, and the life, will we be able to comprehend and create art.

Jung clearly expresses his philosophy: “Only when we know the Holy Son Jesus who is the way, the truth, and the life will we be able to comprehend and create art.” This philosophy is embodied in his artwork, and you can see how the freedom he gained by learning the truth through his life experiences is also alive and breathing throughout his artwork.

The painting that especially drew people’s attention at the exhibit is Destiny, which was nominated as Jung’s featured artwork at 2011 Arteclasica Art Fair held in Argentina. It won plaudits from people around the world. He portrayed the destiny of the weak before the strong through painting and said, “I received the design from the Holy Son Jesus and He showed me a vision through inspiration, so I drew it swiftly in an instant without being able to breathe.”

A snail standing on the cliff of death, like the one in Destiny, is a stork’s favorite prey. There would be no one who would say that the snail will survive. The stork thinks the same and says, “You are my prey. Once I peck at you, it is over.” However, the snail does not surrender to death but says, “I will live.” It is running with all of its might to avoid death. No matter how fast the snail may move, before the stork, that speed is like the speed of the hour hand before the second hand. Jung explained that he was depicting a person who leaves his destiny up to the Heavens.

This painting conveys the message, We cannot do anything we want with our life, but our destiny is left up to Heaven’s Will. This painting is filled and packed with the desire to convey that meaning. He illustrated the messages, If you give up, you will die and be defeated, and, Do not be conscious of others, but do it until the end. When you look at all the strokes of the painting, it seems as if the notes of Beethoven’s The Destiny Symphony have been precisely depicted. The top part of the painting was drawn with strong strokes, and the bottom part was drawn with soft strokes, expressing the element of sorrow.

The objects that appear in his drawings are mountains, seas, the sun, birds, trees, and rocks: things we can commonly see in nature. However, the way those objects are illustrated on his canvas is not ordinary at all. The reason is that Jung is not restricted by institutionalized education or by a sensory experience that is limited to the physical body and external stimuli, but he freely receives various ideas through communing with the Divine.

Jung is an artist who goes beyond mimicking certain models. He has been freely creating his own world of new art. Yet, there is no disorder to be found within that freedom; the reason being, instead of portraying imperfect human beings or a distorted world caused by mankind’s ignorance and errors, he endeavors to shape his images using the freedom found within the truth and within the ideal world which our Creator governs.

Hegel (Georg Wilhelm Friedrich), a German philosopher, explored this idea saying, “Art that makes people aware of things related to the Divine Being, which is the greatest interest of finite human beings, as a general truth and makes them feel it with their senses is art that accomplishes art’s greatest task.”

Jung’s great masterpieces eliminate the distance between human beings and the Divine and establish the perfect beauty called harmony.

It is difficult to find the application of realism towards beings or objects in his artwork. He infuses dynamic vitality into each object so that even if an object may appear to indicate one thing, he secures it in independent features so that it will not be confined to only one referent. Even in his paintings of a face, you can catch a glimpse of the righteous figure of the Divine Being within a human image made with simple lines, the image of a benevolent Jesus or the image of a vigorous eagle, which all appear to overlap. Through this, we can discover the concept, the Aura of a work of art, that Walter Benjamin had once described.

In his paintings of pine trees as well, while minimizing the usage of combining various techniques as well as the addition of extra details as much as possible, Jung displays unique shapes, such as a pine tree coiling up like a dragon, a pine tree with a brawny appearance, a pine tree standing while firmly rooted to a rock, and a pine tree sitting on the top of a mountain.

In addition, his compositions of various images of palm trees boasting grand and charming appearances, of fruits after having survived the throes of the ocean and the winds of the sea, and of a weak snail defying a stork that is infinitely stronger suggest many significant meanings. In these artworks, Jung’s twists and turns that he went through in his life, his breath of struggle for the beauty of perfection, and his shouts of victory permeate throughout his artwork intact with his guidelines for life.

Also, there is a series of Chinese ink wash drawings that Jung has drawn. On these drawings, Jung paints rocky cliffs that are surrounded by the sea, an evergreen tree that is rooted on one of the rocky cliffs, seagulls flying over in the sky, the crimson sun rising, and people who are racing while riding on a boat on one canvas. Those drawings are his great masterpieces that eliminate the distance between mountains and seas, Heaven and Earth, and God and human beings, and literally actualizes the beauty of perfection called harmony.

In such works of art, the chronological flow of history and the endlessness of time that can change a human being’s life are inherent. Furthermore, the curves of each of his lines drawn with one brushstroke vivify the sense of rhythm found in nature, which increases the musicality of his artwork and amplifies its vitality.

In addition, Jung’s desire to harmonize items of different nature led him to adopt calligraphy as one of the elements of his paintings. This applies when he pictorializes his signature into an object or when he couples his drawings with poetry containing his ideologies. His experimental spirit, which boldly tears down the walls of genre and strives towards aesthetic unity, has given birth to artwork of superiority.

Jung has established God’s majestic world of creation as the target for his paintings and has expressed it wondrously and beautifully using his spiritually keen eyes to see the beauty in the world of the Divine. Above all things, his artwork has the power to move one’s soul. It allows us to face God and opens the pathway for us to search for the purpose of life so that we can gain eternal life. That’s why those who see his artwork respond to his teachings.

As a religious leader, Jung has adopted art. Drawing art that takes responsibility for life is a great task, and living his life in order to reach the pinnacle of art is a tremendously valuable and beautiful task.

His world of art is coherent with this Bible verse: “The truth will set you free.” (John 8:32) His artwork represents his communion with God and a mentality that has reached its peak, one that has reached God. At this exhibition, we expect to witness the greatest art that has been created through the true unification of religion and art.

This exhibition is interesting due to the fact that you can see the artist’s world of art and the process of its transformation. In the case of Jung’s paintings of a pine tree, Jung said that he completed them by overcoming difficulties even if the environment and the conditions were not favorable and by devoting himself intensely to painting with his soul for art. In addition, for his painting of a rocky cliff, we can see that he tried to change his approach as he studies how to continuously improve.

If you make a group reservation a day before, you can view the exhibit while listening to a detailed explanation of the paintings from one of the staff members of the art museum, who will also act as a guide. Admission is free and exhibition hours are between 10am and 5pm. However, it is closed on Wednesday.

President Jung Myung Seok has been active in his artistic activities by exhibiting his calligraphy and a number of his paintings in this nation as well as in England, France, Germany and Argentina. In 1995, he began his literary career with a publication in the monthly magazine, The Trend of Literature, and became a published poet. His books of poetry, The Woman of Poetry and Speaking through Poetry, which were both published last July, have also become best sellers. Ten of his poems have been registered in The Encyclopedia of Korean Poetry (2011), which covers 100 years of the history of Korean poetry. His biggest works of literature are The Word of Salvation, his sermon collections, The Word of Life, and his proverbs book, Heaven’s Word, My Word.

He has studied the Bible for 50 years, and while continuing to do so, he is serving as the president of Christian Gospel Mission and also the president of the International Cultural Art and Peace Association.